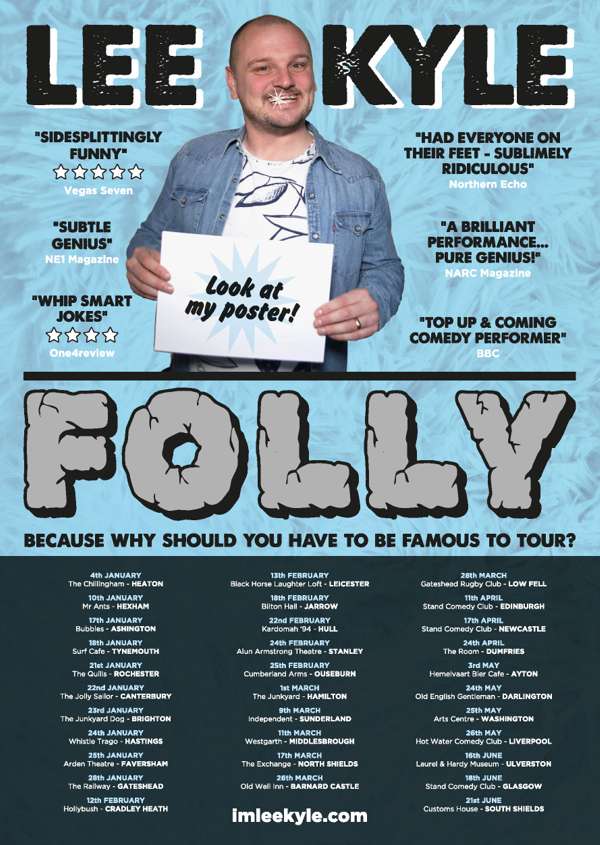 At the 2017 Edinburgh Fringe, Lee Kyle got a really nice review. The bit that stuck in his mind was that 'It would be good to see him find more of his audience'.

"Yeah" he thought "It bloody would!"

So, in a moment of madness, he has decided to bite off more than he can chew and has booked a 30+ date national tour, as an attempt to answer the question "What happens if you do a tour while not actually being famous?"

Then, as if that wasn't enough, he is ending the tour with a gig in a 400 seat theatre in his home town.

He'll also be recording a documentary as he goes, while hoping not to regret it.

He's good by the way, should have probably have said that earlier. He's done a bit of telly and radio but nothing you'll have seen, which is a good thing really or the whole point of the tour won't have made sense.

He had a book out last year, that was in the top ten comedians books on Amazon UK and led to almost no rasing of his profile. His podcast with Sammy Dobson (From BBCs Boy Meets Girl (Yep, she's better known)) is called Which Is The Best? and is funny and is liked by people who like it.

Come on, get on board, take a chance. Be cool.

“Had everyone on their feet - Sublimely ridiculous.” - Northern Echo