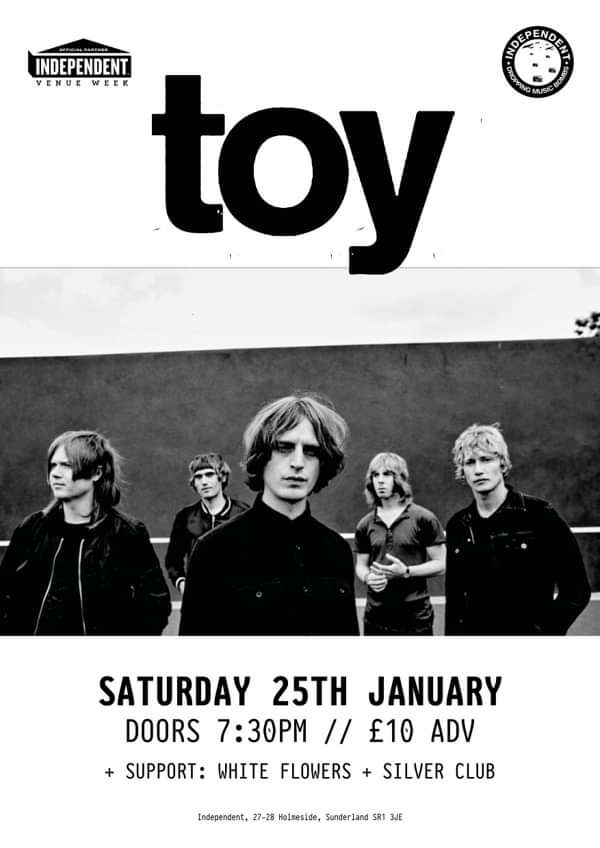 Tickets on sale here or from Hot Rats

Since 2010, Toy have earned a reputation as a band of integrity, virtuosity and taste, with Tom, Maxim, Dominic, Charlie and (joining in 2015) Max creating a sound that is embedded in the underground tradition, yet distinctly their own. Since their inception, they have released the acclaimed albums Toy (2012), Join The Dots (2013) and Clear Shot (2016), and toured everywhere from Serbia to China. Their fourth album, Happy In The Hollow, is entirely uncompromising: an atmospheric capturing of a state of mind that touches on Krautrock, electronic dissonance and psychedelic rock while building its own reality and inviting us in. When you look at Toy’s background, their journey down this road less travelled begins to make sense.

Having all met in London and sharing a love of Nuggets-style garage, post punk, acid folk and other buried treasures of late 20th century music Tom Dougall, Panda Barron, Dom O’Dair, Charlie Salvidge and Spanish keyboardist Alejandra Diez started as TOY in 2010. Diez later decided to leave, Max Claps of the Proper Ornaments joined, Toy spent a few years living together in a semi-derelict house in New Cross, got a new manager and a new home on Tough Love Records, and expanded their musical vision.

Happy In The Hollow is the result. Familiar qualities like metronomic rhythms, warping guitars, undulating synths and Tom’s gentle, reedy vocals are all in there, but so is a greater emphasis on melody, a wider scope, and a combining of the reassuring and the sinister that is as unnerving as it is captivating. “I live in a box inside your mind,” sings Tom with a strange kind of tenderness on Strangulation Day, a song written by Max. “Playing with your dolls, think that they’re mine. I paint all their toes and we’ll pull them apart.” An ominous, pulsing hum from a 60s organ Max picked up for nothing adds to the creepiness.

The sound has expanded — and grown more confident — in part because this is the first album for which Toy has become a self sufficient five-person unit, producing, mixing and engineering it all themselves. Former producer Dan Carey gave them the keys to his studio in Streatham, held a 40-minute crash course in working the desk, and left them to it. “Each song was a blank canvas,” says Panda. “Producers inevitably develop their own patterns over time, right down to certain drum sounds. We were starting from scratch and it felt very creative as a result. The result is the first album we have made that we all feel deeply connected to.”

Having all previously been immersed in the recording process from demoing, to home recording and experimenting with various mixes, Dom also had some production experience having worked in a grime studio in Hackney. “Weirdly, I could transfer some of the digital production techniques I had learned at the grime studio to Dan’s analogue set up,” says Dom, who got so involved, he even spent three weeks sleeping in Carey’s studio. “The most exciting thing was finding this marriage of human- and machine-made music. In the recording of Energy, we used a drum machine to make a rhythm faster than a real drummer could while also shaping the drum machine’s programme so that each bar is different, meaning the drum machine becomes more human. Then we attempted to play along with it. Then we got Charlie to reproduce it. He actually picked it up remarkably quickly.”

Jolt Awake, which has an influence from German electronic pioneers DAF, and Sequence One use this welding of an organic, human drum kit and a morphing drum machine. They also go toward the kind of controlled aggression Toy do so well — all understated rhythms and rumbling bass. “With Sequence One I was thinking about the horrible things you see or read about on the news each day,” says Tom. “It has an apocalyptic feel, probably because I wrote it while imagining walking through a war zone with my girlfriend. It is a love song, really.”

Mechanism exposes Toy’s longstanding love of Neu!, with a tight, unchanging beat driving the kind of free-flowing keyboard melody that could soundtrack footage of either sporting prowess or horrific violence, depending on your sensibility. The lyrics are equally open to interpretation. Max and Tom wrote them using William Burroughs ‘cut up’ technique of chopping and rearranging text to find new meanings. Mistake A Stranger, which bristles with an angular kind of energy, came from the feeling of staying too long at a party and letting paranoia sink in. This is music suggestive of things lurking just below the surface of the everyday.

“We have an aspiration toward things not always seen or felt,” says Tom. “We are interested in anything that makes you feel or think differently. It doesn’t have to be drugs. It can be music, films, books… whatever takes you outside of the everyday.”

Strangulation Day musically draws from the influence of industrial artists such as Throbbing Gristle and Psyychic TV, so much so that Cosi Fanni Tutti has provided a remix of the track which will released as part of the limited edition version of the album.

Then, like the innocence of the Velvet Underground’s third album after the decadence of the first two, comes the sweeter side of Toy. You Make Me Forget Myself is a beautiful declaration of love and companionship, and one of the prettiest songs the band has written. “Actually it’s a break-up song,” says Panda, who wrote the words and sings the lead vocal; a first for him. “At least, it is a fond farewell. I performed it at a gig recently and discovered very quickly how terrifying singing is.”

The Willo is a dreamlike glide into pastoralism inspired, says Tom, “By the late 60s/early 70s folk we all love: Pentangle, Bert Jansch and Heron.” It showcases Panda’s recently honed acoustic guitar fingerpicking skills, Dom's detuned electric guitar playing and Max's deep/low Korg swells and was inspired by the well known folk-tale. “People have seen versions of Will’o the wisp over the centuries,” says Tom. “It generally means something ominous is about to happen.”  Charlie’s House is a sweet acoustic guitar instrumental, and finally comes Move Through The Dark; an epic balance of light and shade framing a tale of searching for a better tomorrow while accepting life’s realities. It completes Happy In The Hollow, an album that finds Toy coming of age: independent, searching, and very much on their own journey.