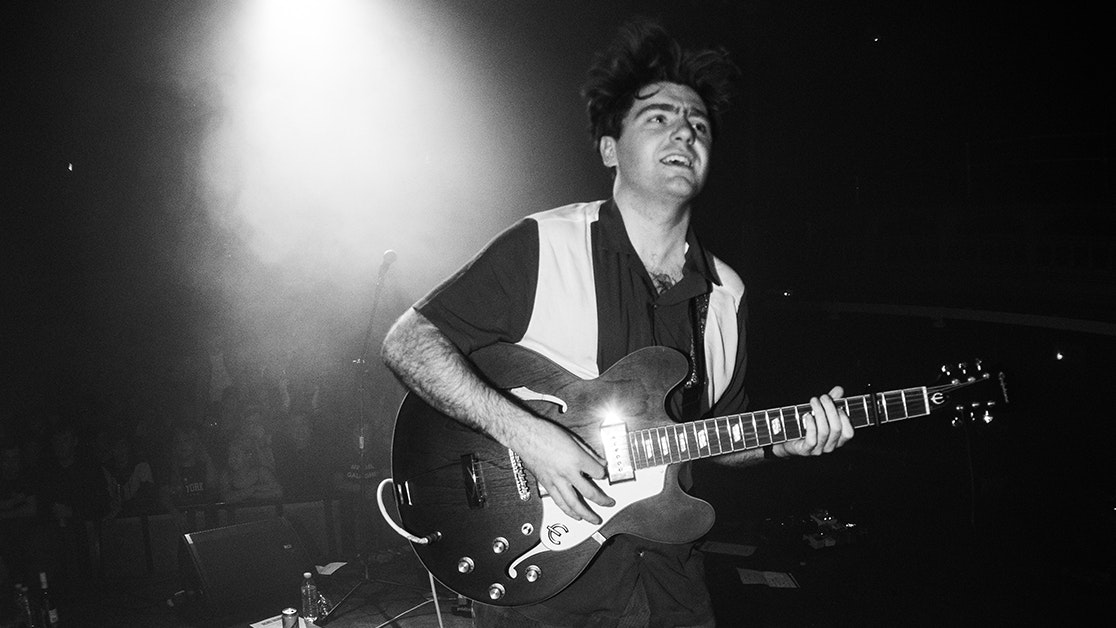 To bring his new music to life Michael’s been collaborating with producer Chris McManus at Blank Studios, an independent studio five minutes from Newcastle’s city centre that’s become something of a second home for Michael as he puts the finishing touches to a debut album that promises to bring his guitar-driven pop to a wide audience.

It’s the culmination of a musical obsession that dates back to Michael’s teens. While his father was away fitting gas mains and his mum had her hands full with Michael and his three younger sisters, it was Michael’s Nan who provided a musical education. “On family holidays it would always be Nan with her MP3 player,” Michael recalls, “and when I was 13 she gave me a big pile of CDs.” Among them were albums by David Bowie and The Rolling Stones — albums that went on heavy rotation next to the bands Michael had already discovered for himself: Oasis, Razorlight and The Wombats, then later on bands with a punkier edge like The Cribs.

Inevitably, the guitar that had been gathering dust in a wardrobe since Michael’s tenth birthday suddenly seemed more appealing. In fact by 15 he was trying out his luck playing guitar in school bands called things like Neon Sheep (“terrible name, to be fair”); they’d play shows in local pubs and bars. Although those bands all came and went Michael wasn’t ready to stop performing, and with time he began to wonder if he could step up from being guitarist. “I was still writing songs and that in my bedroom,” he says, “and then one day I was like: ‘To be fair, these are quite good, these songs. I’ll try gigging them’.”

Those songs may have inspired the gigs, but with each new booking came the urge to create new music. “As I started getting a local following, I realised that if people were coming to see me more than once, I should make sure I had new songs each time they saw me,” Michael says. And the cycle continued: as his songwriting blossomed, Michael found his live shows shifted up a gear too. “They’d always be a bit more upbeat than your average acoustic act,” he smiles. “I remember thinking: ‘When I go to gigs I like to dance and jump about — I need to get people moving their feet.” As word spread and his following became larger, Michael got to the point where his local shows were becoming rather less local, spreading to Newcastle, then Manchester, then London.

By 2019 this had also prompted Michael to put out his self-titled, self-released debut EP, bursting with ambition: a deft blend of buoyant music and introspective lyrics that continues in Michael’s newest tunes, which strike the impressive balance of being brilliantly accessible and totally credible at the same time. In typically understated fashion Michael’s not one to overplay the mystery of the creative muse (“I just pick up the guitar and see what comes out”), but he finds that he never strays too far from the influences that have stood him in good stead so far: “Where I’m from, and the people around me — that’ll always be more of an inspiration than anything else.” As for where inspiration strikes… Well, Michael’s hit on a routine that seems to get the best results. “I usually go in the bathroom to write music,” he laughs. “I don’t know why, but that’s where I write all my songs. Just me, in a bathroom, with my acoustic guitar.”

Whatever the method, it’s doing the trick. Yesterday is an uncommonly meditative take on the ‘looking back’ song — Michael does so with fondness, not regret. “It’s a song I wrote inspired by a night out,” he recalls. Not the greatest night out of all time, he adds. The everyday kind of night out that we take for granted. “Sometimes you look back on your youth and you think, ‘I wish I could do that again because it was good’,” he adds. “And Yesterday’s a song about that.” In Fallen Michael views a relationship from both sides, taking the character of the boyfriend in verse one, and the girlfriend in verse two, while Call My Name tells the story of one of Michael’s own relationships — or at least the end of it. “It’s about me and my ex-girlfriend splitting up. We kind of grew to be different people, and it’s a song about how dependent one person can be on someone else, even if that other person doesn’t feel the same way,” Michael says. “Some songs about the breakdown of a relationship are very much, ‘Why has this happened? Why have you left?’,” Michael adds, “but this song is kind of going: ‘I know why.’” To lighten the mood there’s Lula, in which Michael sings of an unexpected one-night-stand from his younger days: “I was out with my friends, then this lass who was a bit older than us kind of came over and was like, ‘You’re coming with me’,” he laughs. “I was like, ‘Oh right, yeah?’”

The honesty of Michael’s lyricism is matched by the honesty of his musical style: a fond throwback to the thrilling British guitar music boom of the 2000s and a reminder that there’s a whole world of exciting music beyond metropolitan tastemakers. This is music that’s raw, gritty and above all human. And despite Michael’s well-defined sonic palette, he’s achieved a real diversity within his new songs. “One of the things I’ve tried to do is make every song stand apart from every other one,” he adds. “I like to have each track be individual, so it pricks people’s ears up.”

And ironically, though Michael’s music is a celebration of the everyday, like all the best pop music it has a strong knack of taking us out of our own lives, even if it’s just for three minutes at a time. “Talking with fans after gigs I’ve found different people are taking different things from my music,” he explains. “Some of my songs have got a message, but ultimately it’s escapism, too — people come to listen to me and my band, and they feel something in the moment that means they can forget about everything else that’s going on in their own lives. There’s a lot of shit going on in the world. Sometimes good to just have a dance about and forget about everything.”